basic culinary
medicine course
The more whole, plant foods and fewer highly processed, calorie-dense, and animal-derived foods one eats, the more health benefits one accumulates (e.g., reduced risk of chronic diet-related diseases, increased longevity, etc.) and the less time one needs to spend worrying about such activities as counting calories or restricting portion sizes in order to maintain or lose weight. Plant foods are also filled with fiber and antioxidants.

BENEFITS OF WHOLE FOOD PLANT-BASED (WFPB) DIET
There are numerous other benefits, with new studies coming out regularly. It is important to note that many studies showing the benefits of diets high in whole, plant foods are not studying WFPB diets purely. Many (if not most) actually refer to either predominantly WFPB diets, vegetarian diets, vegan diets, pescatarian, or Mediterranean-style diets.​
​Predominantly WFPB diet: the diet promoted by the lifestyle medicine global alliance (LMGA) and is a dietary pattern centered on whole, plant foods including vegetables, fruits, whole grains, legumes, nuts, and seeds. Processed foods and animal foods are limited or excluded.

Vegan diet (otherwise known as a strict vegetarian diet): is one that includes no animal products (i.e., no meat, poultry, seafood, dairy products, or eggs), but could include any plant-based foods. A vegan diet does not necessarily limit unhealthy processed foods if they are free of animal products. However, most following vegan diets eat healthier than the general public, primarily owing to higher intake of plant foods. A purely WFPB diet is a type of low-fat, vegan diet based on whole foods. A predominantly WFPB diet is not a vegan diet if it includes any animal-derived foods.

Vegetarian diet (otherwise known as a lacto-ovo vegetarian diet): is similar to a vegan diet but includes dairy products and eggs. A vegetarian diet does not necessarily limit unhealthy processed foods provided they are free of animal products that would require an animal to be killed to obtain the food (e.g., meat, poultry, seafood, gelatin, etc.). However, most following vegetarian diets eat healthier than the general public, primarily owing to higher intake of plant foods.

Pescatarian diet: similar to either a vegan or vegetarian diet, but with the addition of fish and/or seafood. Pescatarians do
not eat meat or poultry.

Mediterranean-style diet: It is a predominantly (but not entirely) plant-based diet with staples including whole grains, vegetables, fruits, legumes, nuts, seeds, and plant oils, such as olive oil. Fish and seafood are eaten 2-3 times weekly, along with small amounts of dairy, eggs, and poultry. Wine in moderation is also included. Red meat, processed meat, refined carbohydrates, and added sugars are generally avoided. It is also important to understand that there are a variety of Mediterranean diets. This description refers to the type of Mediterranean diet most commonly described in clinical trials, which has been the topic of numerous health-related studies and dietary guidelines. Actual foods eaten do not need to be those found in the Mediterranean region of the world.​
SHIFTING DIETS

Protein Flip
This term was popularized by the Culinary Institute of America, one of the premier culinary schools in the U.S. It is the practice of flipping the plate from meat-centric to plant-centric. Instead of meat making up the center of the plate with vegetables being the smaller portion or an afterthought, vegetables and other plants become the stars while meat portions get reduced to garnishes or sides. This is a great strategy for patients who are not willing to entirely give up meat but could benefit from reducing intake and/or substituting with plant sources of protein. In a typical meal, one might have eaten a large piece of chicken with a small side salad. In a Protein Flip, the portions are reversed. In a Protein Flip, this meal may become a large salad with added whole grains, legumes, nuts, and seeds to make the salad more filling and increase the protein content while reducing the portion of chicken to 1-2 ounces sliced atop the salad as a garnish.

The Protein Flip can be the gateway to healthier foods. This technique is very useful for those who are uninterested or unwilling to cut unhealthy foods-such as red meat-out of their diets completely. It also adds the familiarity of something they associate with deliciousness and satiety (e.g., meat) to foods previously eschewed from the diet (e.g., vegetables). Finding a way to incorporate these healthier foods into the diet helps one to develop a taste for them, making it more likely they will try other vegetables or choose them as a regular part of their diet.

When making dietary shifts-even if interested in cutting down or cutting out meat and other animal products-cravings for these items can remain intense for quite some time. This makes sense since food is part of culture, memories, and time shared with loved ones. The Protein Flip method of incorporating small amounts of highly craved foods may help some people prevent binging on them after periods of trying to abstain completely. Satisfying a craving can also help some people limit total food consumed because of their psychological hunger (a desire to eat for a variety of reasons such as habit, emotional state, or because something looks or tastes good-separate from physiologic hunger) is quenched. For others, however, controlling portions of these foods are challenging, and they may find it easier to completely eliminate them.
​
Dessert Flip
Trying to reduce the amount of very sweet foods-including artificially sweetened foods-eaten is important for retraining
the palette to appreciate the natural sweetness in healthier options, such as fruit. In a typical dessert, one might have a large piece of a decadent sweet garnished with a bit of fruit—think strawberry cheesecake with a sliced strawberry on top. In a Dessert Flip, the portions are reversed. The size of the decadent dessert is reduced to just a bite or two and accompanied by a larger arrangement of fresh fruit. This is generally just as satisfying as the original while increasing the nutrient density and decreasing the calorie density. This is because the most enjoyable bites of any dessert are the first, and having a couple of bites is generally enough to quench a sweet craving at the end of a meal. The Dessert Flip is not the same as a healthy dessert, which is one that is nutritious in its own right.

While the Dessert Flip, like the Protein Flip, works well for some to satiate cravings and prevent binging on sugary foods, other individuals may struggle to limit highly palatable foods to a few bites and may prefer to cut added sugars all together. Work with your patients to find out what works best for them. The overall goal of reducing added sugars in the diet is achieved by both approaches.

​HEALTHY AND DELICIOUS MEALS
​This course teaches how to make healthy dishes delicious and craveable. Humans are wired to seek out delicious food healthy or not. The best ways to get people to eat more healthy foods and fewer unhealthy foods are to make the former
taste as good (or better!) and be as accessible as the latter.

Recipes
When cooking, there is no award for following a recipe to the letter. Many recipes available on the Internet haven't been tested. If a recipe from a source of unknown reputation fails, you have no idea if it's you, the ingredients, or the recipe. Learn to trust your gut if you get a feeling that a dish would be better with a tweak or addition, try it. Recipes are included throughout the course since some people like to follow recipes, while others just like to have a general guide on their cooking journey. Recipes also help you to shop for appropriate amounts and types of ingredients for each session.
​Balancing Flavors & Textures
Good cooking begins with tasting and learning to adjust flavors. Begin to taste foods for sweet, salty, bitter, acidic, and umami (savory) flavors. Note whether a flavor predominates or if flavors are balanced. Think about what you ideally want in terms of flavor from a final dish. Do you want something with an acidic tang, or do you prefer a savory, balanced dish? If the flavors of the dish are not where you want them to be, try to balance them using flavoring ingredients with other aspects of taste. For example, if a food is too acidic or bitter, try adding something sweet. If a dish is bland, try adding a few drops of acid, such as lemon juice, vinegar, or hot sauce, and then salt to taste (if using salt). From a culinary perspective, when salting, the optimal level for flavor (without over-salting) is achieved when you can taste the flavor of the food toward the back of your tongue but don't get a dry or parched feeling in your throat after eating it. From a medical perspective, to reduce salt intake, consider adding herbs or spices to savory foods or cinnamon, cloves, nutmeg, or ginger to sweet foods to limit the amount of salt that you need to make the dish delicious. Adding a little acid to a dish prior to salting also heightens flavor and can reduce the amount of salt needed.

The texture is also an important consideration. Crisp and crunchy textures stimulate the appetite; this is why most appetizers have a crisp component. Creamy textures can be comforting, but anyone required to eat a pureed diet for any length of time will tell you how boring and unappetizing meals are when every item has the same texture. The best meals incorporate a variety of textures. Textures can have positive and negative associations for some eaters. If someone is averse to a certain food, make sure to explore whether the flavor, texture or both are issues. Oftentimes, someone may be averse to a vegetable cooked in a way that gives it a certain texture but enjoy it prepared another way. 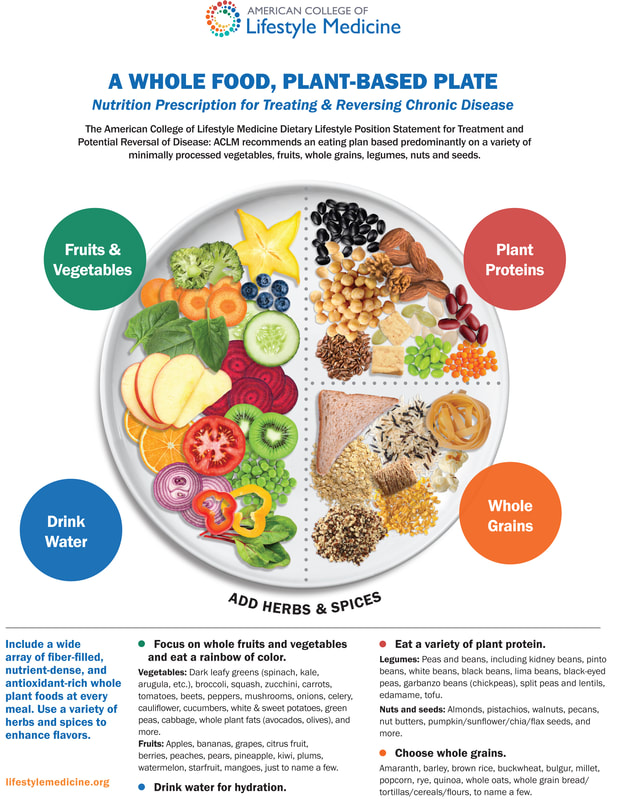 Downloadable recipes
You may access all the recipes listed above.  Choose one or more recipes and create 1 set of for your meal. All recipes have instructions that you may use as guide. Document your activity by taking photos of each recipe, starting from Mise en place up to the final presentation with brief description of your planned meal.

​Please organize your documentation in a single file and send us the completed task using PDF format.
register to complete the basic certification course

The violation of physical law, with its consequent suffering and premature death, has so long prevailed that these results are regarded as the appointed lot of humanity; but God did not create the race in such a feeble condition.  This state of thins is not the work of Providence, but of man.  it has been brought about by wrong habits, - by violating the laws that God has made to govern man's existence.  A continual transgression of nature's laws is a continual transgression of the law of God.  Had men always been obedient to the law of the ten commandments, carrying out in their lives the principles of those precepts, the curse of disease now flooding the world would not exist.

"Know ye not that your body is the temple of the Holy Ghost which is in you, which ye have of God, and ye are not your own? for ye are bought with a price; therefore glorify God in your body and in your spirit, which are God's."  When men take any course which needlessly expends their vitality or beclouds their intellect, they sin against God; they do not glorify Him in their body and spirit, which are His.